I apologise in advance for not writing about all our cyclists – most of them were always away up the road from me so could type ‘could see on horizon’.

Today we would be joined by Ian Poppleton and his prodige Richard Nutt, who would be the first to tell you on day one he had struggled and had serious concerns he wouldn’t be able to complete the very hilly and daunting day two.

Up for an 8am hearty continental breakfast (everything was 5 stars about this hostel). and by 9 we would be hitting the road and it was dry 🙂 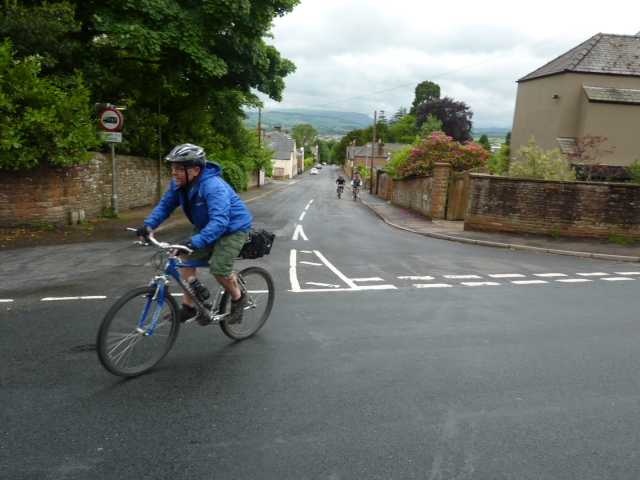 It was straight into the first of many climbs this day which basically climbed out of Penrith and again along country lanes before descending fast (apologies to the chicken Carl mowed down, but didn’t kill) down towards Langwathby. As a veteran of many C2C’s I knew from there it was a 10 mile climb up Hartside (via Little Salkeld and Renwick) to the cafe at the summit which unfortunately was covered in thick fog. I started having technical issues half way up the climb, the cotter pin holding the left crank on had started to come loose (I’d had some issues on day 1 but thought tightening it at the hostel would resolve it). Turns out it was stripped 😦 the good news was I had a couple of spare, the bad news, I didn’t have a hammer and anything to drift it out – call in the cavalry. I phoned my father in law, Alan who agreed to rendezvous at the Hartside cafe with his toolbox which he duly did. The cafe was packed with hundreds of very wet and steaming cyclists (not pleasant but buzzing) – it was now coming down in buckets. The rest of my squad sat in the warmth and enjoyed their coffee and cake whilst I managed to replace the dodgy cotter pin and was able to set Alan on his way home – thanks. 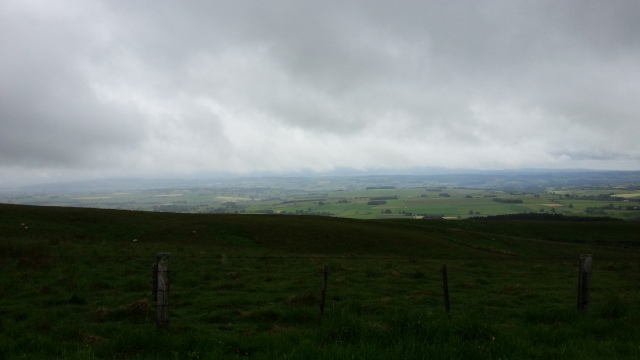 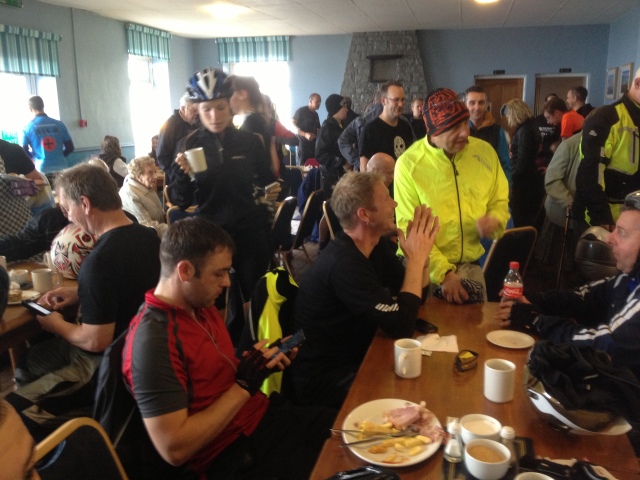 I was now very concerned as I knew we had a steep drop-off off of Hartside towards Garrigill and at the bottom was a T junction. My brakes are rubbish in the dry but even worse when the roads resemble rivers (which they did) and the rims get wet. This was going to be a bottle test. I had the brakes pulled full on and …. the Chopper was still accelerating. Drastic action was called for – I cocked one leg over the cross bar and headed towards the grass verge hoping it wasn’t a hidden ditch. Thankfully it wasn’t and it slowed me enough to leap off the bike, but hold it and continue to walk down the rest of the hill – how disheartening??

I tell everyone that the hardest climb of the whole route is the climb out or Garrigill (and I’ve yet to be proved wrong) All my party and many other cyclists were sheltering under the large trees in the village square. I’d now reached the stage where I’d get  a very large cheer when I’d arrive and the girls from the Hospice would should “Chopper Man” – great encouragement- thanks. I didn’t hang around and soon found myself on the dreaded climb. This is where I was wishing I was on a nimble bike with 27 gears instead of a heavyweight relic with 6. Fair to say, I pushed up quite a bit of that hill  but I was joined by others like Ian Hall from our group (I’ll give him the benefit of the doubt that he was keeping me company)!! The girls were again doing marvelously and I got plenty of encouragement from them and their support vehicles and the support vehicles from other riders – thanks again. 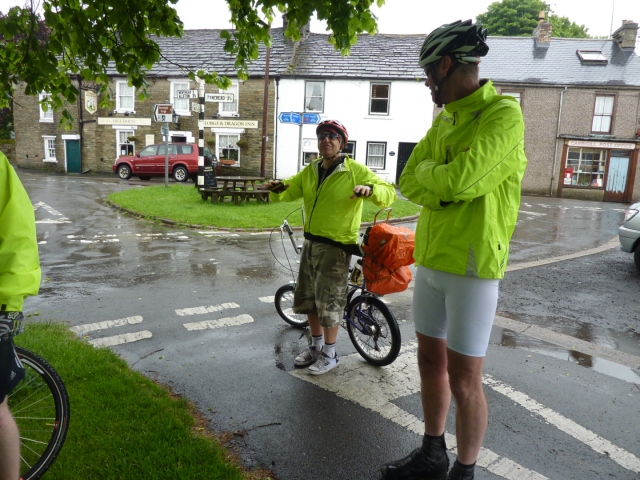 The drop into Nenthead is terrifying when you have brakes on a dry road. You may have guessed already but it was like a river and  effectively I had no brakes so it was back to the track of the previous descent bail then hold the bike as I plodge down the hill. I swear I was getting trench foot – wish I’d worn my wellies 😦 John reliably informs me he hit 40mph on his descent!!

Nenthead is ‘unusual’ being an ex lead mining village which is now the home to dropouts and hippies. I know because John Bell and I once played football a mile underground here where the hippies had left a football and a Christmas tree down the mine (it’s technically trespass) – that story s for another day.

Luckily (for me) Ian Hall picked up a rear puncture (our only such occurrence on the whole ride) which gave me time to pop into the Miners Arms for coffee to takeaway (don’t bother asking for a latte in these parts). This was an organised stop for the girls who were all sitting in the conservatory having their refreshments. It finally stopped raining yippeee 🙂 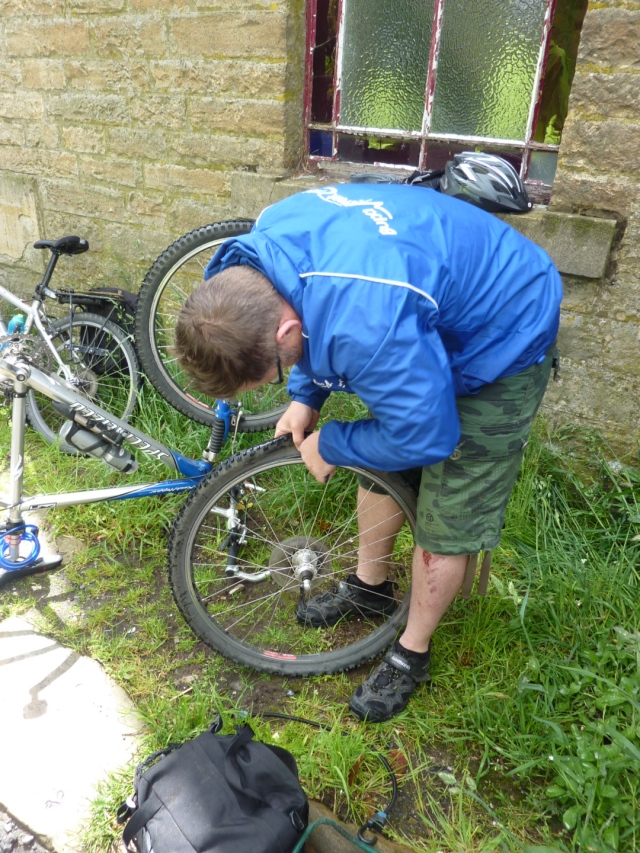 I set away first (giving me a chance) because I knew it was a(nother) climb out of the village and up to the highest point on the whole route where we stopped for more photo opportunities. it was then downhill for about a mile accompanied by many of the girls before we came to the right hander which started another hill (the last of the day for the girls as they were all staying in Allenheads) and our 2nd last as we were going another 7 miles to Rookhope. 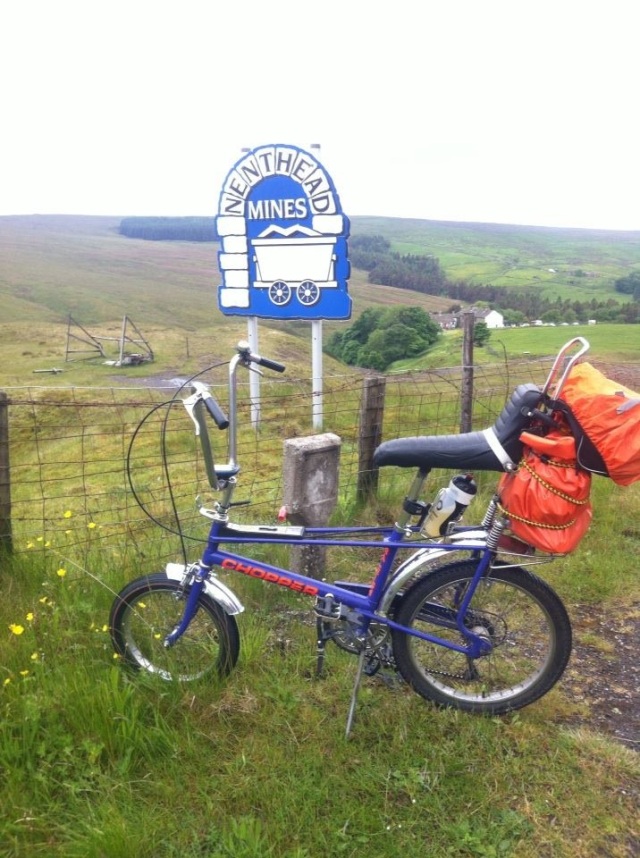 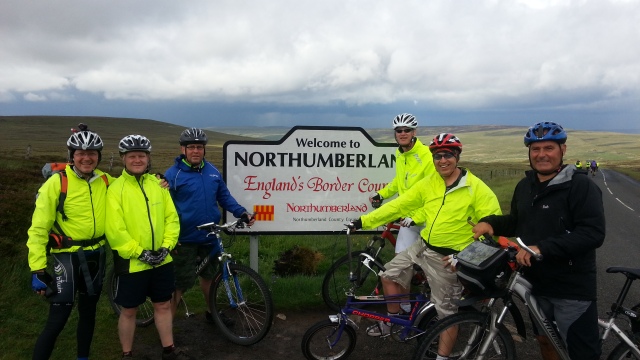 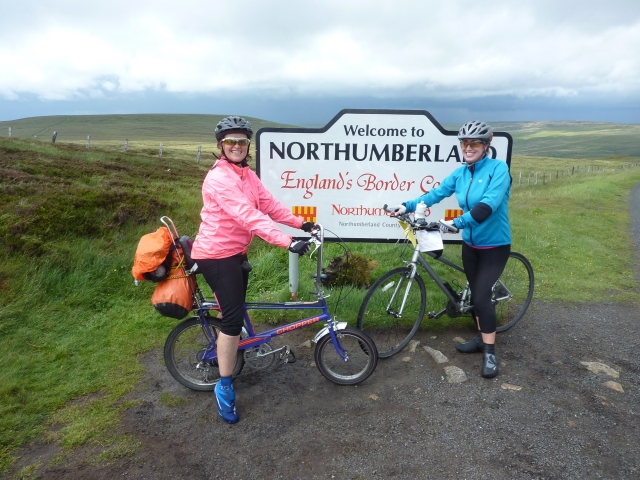 By the time we reached Allenheads it was raining heavy (again) so we took shelter where John and myself knew there was a steep climb (Valley of the East Allen) out to the top of the Rookhope Burn. 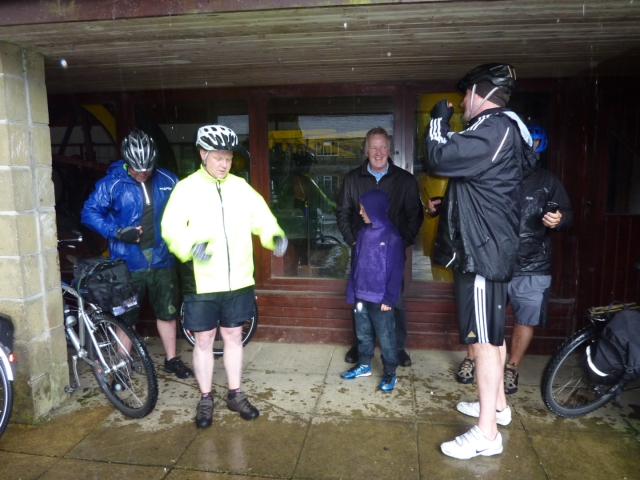 In a break from the weather we set off. Then it REALLY rained, torrential/deluge – it hurt your head penetrating the air vents in your helmet, this wasn’t pleasant. John Bell kept me company going up (feeding me Haribos) we both agreed it was ‘character building’ and ‘out of our comfort zone’. Soon we were at the Cairn at the top of the hill and we both knew it was downhill all the way to Rookhope from here and it had eventually stopped raining. Further down the valley. Rookhope Burn flows into the River Wear.

Once at Rookhope we located http://barrington-bunkhouse-rookhope.com/main/ which isn’t difficult as it’s attached to the Rookhope Inn, the only pub in the village and we were met by our (very friendly) host Valerie Livingstone who was to become one of us over next few hours. We locked the bikes securely in the bike shelter and headed inside. The bunkhouse itself reminded me of a church without the altar and we were saying our prayers that our clothes would dry as we put them on all the available radiators. as well as in the tumble drier and spin drier. Then we jumped in the shower a very pleasant relief from what we had endured during the day 🙂

ALTHOUGH I CYCLE THOUSANDS OF MILES EVERY YEAR, I CAN’T REMEMBER CYCLING IN WEATHER AS BAD AS WE HAD TODAY – except for one day of my LeJog attempt in 2011  😦 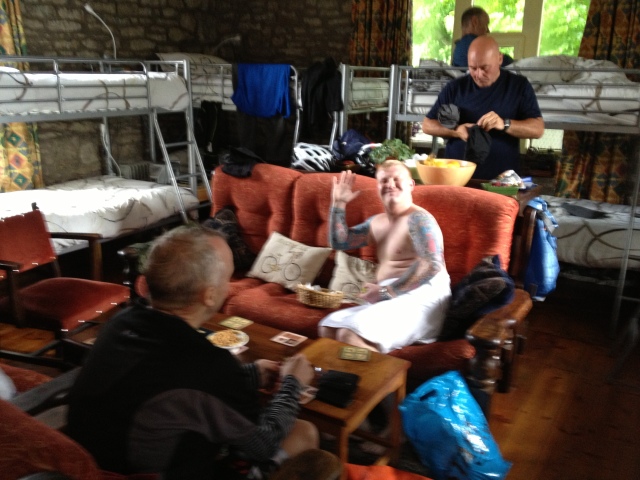 Carl and Ian H. were away to the pub whilst the rest of us chilled a bit more before getting ready and going next door for food and drink (I wasn’t on a limit this night as I knew we only had one hill to climb the following day). The pub was quiet (well it was Sunday night) apart from a few other cyclists who surprisingly didn’t even speak. We ordered our wholesome meal and were soon tucking in then washing it down with various alcoholic beverages – happy days.

Valerie had said her daughter Sinead was back from University and would bring her guitar into the pub to play and sing. And true to her word  she did and what a great talent she is. 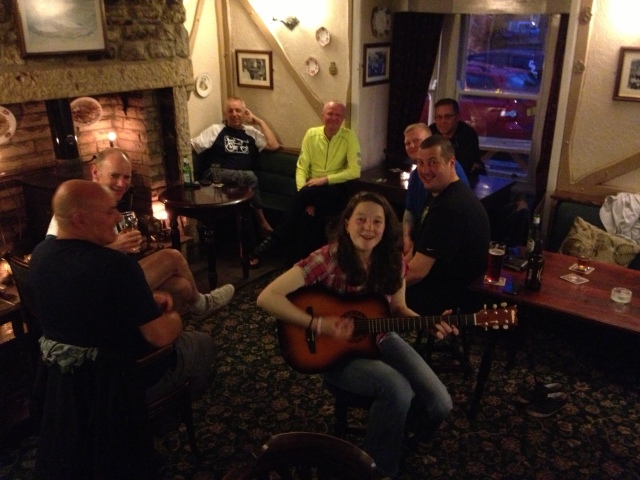 Jed also took his turn playing the guitar whilst Sinead searched lyrics.com for the words to singalong – what a great evening we all enjoyed. Eventually it was back to bed to turn in for the night.

Richard Nutt who had struggled on day one absolutely loved day two despite the weather and the hills and knew he was going to finish the trip – well done Richard.

IT’S NOT TOO LATE TO CONTRIBUTE: http://www.justgiving.com/c2conachopper

'middle aged' cyclist from North East aiming to do the LEJOG in August 2011
View all posts by barneybear69 →
This entry was posted in Uncategorized. Bookmark the permalink.